Betsy had never been to Paris before and she couldn’t wait to see the Eiffel Tower and the River Seine! But more than anything Betsy loved trains and couldn’t wait to go to Lourdes. Lourdes meant a long train ride. A very long train ride—almost five hours! She and her family departed from the enormous Montparnasse gare (station) in Paris to travel to this faraway southwest corner of France at the foothills of the Pyrenees mountains.  And this is what Betsy learned while she was at Lourdes— 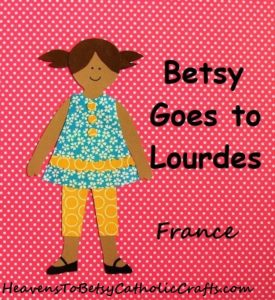 Feb. 11, 1858: It was an icy cold winter day in Lourdes, a town in the southwest of France. Bernadette and her desperately poor family had run out of firewood. They would freeze! “We need wood at once!” said Madame Soubourous to her oldest child, 14-year-old Bernadette. “I’ll go right away, Mama!” said Bernadette and immediately Bernadette, her younger sister Toinette, and their friend Jeanne, set off to gather firewood for the family.

As Bernadette was getting ready to cross the small river Gave she heard a rustling sound. A stirring. But what was it? It was like a strong wind. But the trees weren’t moving, not even a bit. To her astonishment, she saw a beautiful young woman in the grotto at Massabeille. The woman was smiling at her!

“I saw a lady dressed in white, with a blue sash and a yellow rose on each foot. She was holding a Rosary. I thought I must be making a mistake!” said Bernadette. “I took my Rosary out of my pocket and began to pray the Rosary.” The Lady said the Rosary too but said it silently. Only when they reached the Glory Be did the Lady say the prayer aloud. When Bernadette finished the Rosary the Lady disappeared.

Bernadette (1844-1879) became a nun at the age of 22. She died at the age of 34 and, incredibly, her body was found to be incorrupt thirty years later! She is buried at her convent in Nevers, France. Bernadette’s feastday is April 16, the day she died. Coincidentally, Pope Benedict XVl was born on April 16 and he has had a special devotion to her all his life. Bernadette was canonized a saint by Pope Pius Xl in 1933.

Today Lourdes is one of the most famous Marian shrines in the world attracting millions of visitors each year. And the miraculous spring of water at Lourdes is still flowing bringing spiritual and physical healings to many. Thousands upon thousands of sick people come to Lourdes each year in hope of a cure. Countless numbers of volounteers come from all over the world to help them. “Many even give up their vacations to do so!” marvelled Betsy. The feastday of Our Lady of Lourdes is Feb. 11.

WATCH OVER ME, FATHER, SO THAT EVERYTHING I DO MAY BE WITH THE INTENTION OF PLEASING JESUS.

HERE ARE SOME OF THE SIGHTS BETSY SAW THAT DAY ON HER TRIP TO LOURDES! ENJOY THE TRAVELOGUE! And don’t forget to PRINT OUT and do the fun QUICK QUIZ at the end of the page!! 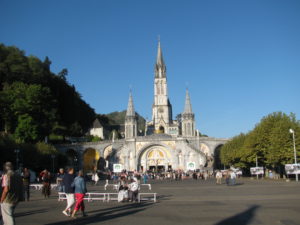 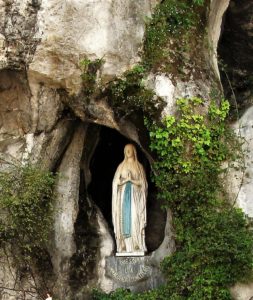 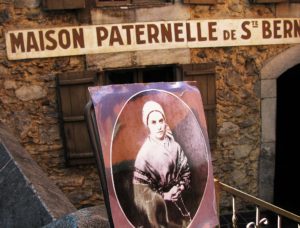 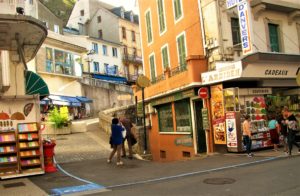 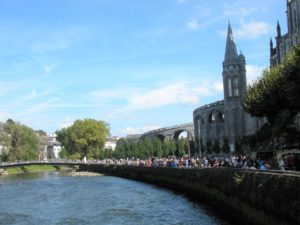 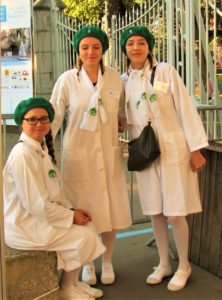 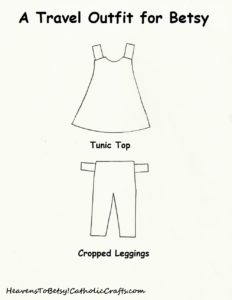 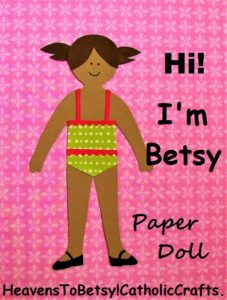 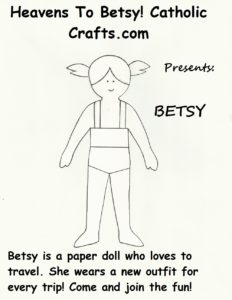 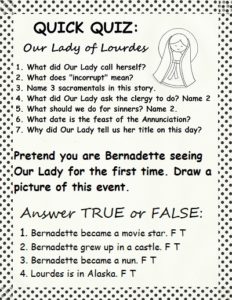 MAKE THE PAPER DOLL FROM CARDSTOCK AND THE CLOTHING FROM LIGHTER-WEIGHT PAPER. ENJOY YOUR BETSY PAPER DOLL!