AN ANGEL IN OUR MIDST: a play about St. Marianne Cope

This is a play about St. Marianne Cope and her work with the leprous children in Molokai, Hawaii. You will also get to meet Father Damien in this play! Two wonderful saints in our midst! 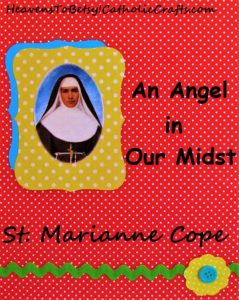 AN ANGEL IN OUR MIDST

SETTING: the leprosy compound for girls at Kalaupapa, Molokai, Hawaii
DATE: 1889
CHARACTERS: Mother Marianne Cope, Father Damien de Veuster, Adele, age 10, and Edwina, Age 7 (both girls are leprosy patients), Mrs. Toguchi, representative of his Royal Highness, King Kalakaua
There is a loud knock at the door; an unseen messenger hands Adele a note; she takes it and says to the messenger (who is offstage)

ACT TWO (one month later)
Setting: the dining hall
Edwina, Adele, and the other girls are busy decorating the hall for a gala celebration: Father Damien is coming to visit and the sisters are planning a party for him. They have been busy in the kitchen for days baking pineapple cakes and coconut tarts and shortbread cookies. The girls are hanging banners on the wall which they made in Art class. The boys from Father Damien’s settlement have been invited and Mrs. Toguchi, a representative of his Royal Highness, King Kalakaua, is coming to present a special tribute to Sister Marianne and Father Damien.
EDWINA: Who is Father Damien, anyway? I’ve heard so much about him!
ADELE: Well, he’s really well known here in Hawaii, everybody has heard of him here. And I hear he’s starting to get known in the world, even! There are even lots of newspaper articles being written about him.
EDWINA: He must be famous then!
ADELE: Oh, don’t let him hear you say that! He wouldn’t ever want to be known as famous! He’s the most humble person you could ever wish to find! I’ll tell you a little about him: He came all the way from Europe, from Belgium, to help us. Because, you see, the government here passed a law in 1866 insisting that all people with leprosy had to come and live here, far away from everybody else. But there was nothing here for the poor people! Conditions were terrible when Father Damien came. But then, everything began to change for the better, thanks to him.
EDWINA: How long ago did he come?
ADELE: He came in 1873, almost 20 years ago.
EDWINA: What did he do once he got here?
ADELE: He built cottages and a church and a hospital and a water system. And he said Mass every day and brought the Sacraments to the sick. He brought medical care too, of course, and he even organized picnics and sports and musical concerts. And he started a choir too. He had a motto. Do you want to know what it was?
EDWINA: I sure do.
ADELE: He always said: “God first, the lepers second, and everybody else, a distant third.” They say that he built 300 cottages by himself! He was always seen with a hammer in his hand! He worked night and day for all of us here.
EDWINA: But why didn’t a whole lot of other people come to help him?
ADELE: Because they were afraid of catching leprosy!
EDWINA: But wasn’t Father Damien afraid of catching leprosy too?
ADELE: Well, if he was, he certainly didn’t show it. He was so happy to come and help the patients here! He knew that God was calling him to come here. He wanted to come. But Edwina, he did get leprosy! He has it now. He’s just like us now. You’ll soon see. And you’ll see, also, that he’s always smiling when he’s with us.
EDWINA: I’ve heard that people call him a saint.
ADELE: Yes, they do, but don’t dare tell him that! He’s so humble that he wouldn’t want anyone to say that!
EDWINA: I can’t wait to meet him.
ADELE: You will meet him very soon. He is so thrilled that Sister Marianne and the other sisters have come all the way from New York to be with us. Now the sisters can continue the work that he started here. Before Mother Marianne came there was no one to look after the girls. She and her sisters came about 6 years ago. But (looking at her watch) we have to run! We don’t want to be late for Father Damien’s Mass. (they leave the stage in a hurry)

ACT THREE:
Setting: the dining hall
Date: the same day, later in the afternoon
The children’s choir have just finished their recital.
FR. DAMIEN: (clapping loudly) Thank you, girls. What a splendid performance!
MOTHER MARIANNE: Father, the choir has been practising for weeks. Can’t you tell?
FR. DAMIEN: Just weeks? It sounds like they’ve been rehearsing for years! (everyone claps)
MOTHER MARIANNE: Father Damien, the children made a card for you. Adele, could you please come up and give Father the card?
ADELE: (comes forth with the card) Father Damien, I will read what it says: It says: THANK YOU, FATHER DAMIEN, FOR ALL YOU HAVE DONE FOR US. WE LOVE YOU LOTS AND LOTS! FROM ALL YOUR BEST FRIENDS AT KALAUPAPA. And everyone of us in the school signed it.
FATHER DAMIEN: Thank you, Adele, and all of you children here today. I’ve never had such a big card in my whole life! And I love you too! In fact, even more than you love me! (much cheering from the audience).
MOTHER MARIANNE: And Father Damien, we have something else for you from the children. Edwina, will you please come up?
EDWINA: (comes up holding a particularly large gingerbread cookie) Father Damien, Mother Renata and I made you a treat to say “thank you “ and to show you how much we love you! She’s an expert at making gingerbread cookies! I know this from experience!
FATHER DAMIEN: Oh, just what I always wanted—a gingerbread man! I never had one of those before.
ADELE: Look!—it’s wearing glasses!
FATHER DAMIEN: Just like mine!
EDWINA: And—look at the hat!
FATHER DAMIEN: Just like mine!
ADELE: Father Damien, do you know who this gingerbread man is?
FATHER DAMIEN: (in a joking voice) Could it possibly, just possibly, be me? (laughing out loud)
CHORUS: It’s Father Damien! It’s Father Damien! (much laughter from Mother Marianne and Father Damien)
EDWINA: Everybody, listen! Father Damien has something to say!
FATHER DAMIEN: Yes, I do. Boys and girls, we have an angel in our midst: an angel who has a sense of humour. Who do you think that angel is?
CHORUS: It’s Mother Marianne! It’s Mother Marianne!
FATHER DAMIEN: Yes! And I have a gift for her too. To say “thank you, Mother Marianne!” (he’s hiding the gift behind his back). Did you know, children, that Mother Marianne was in charge of an entire hospital in the state of New York, before she came here? It was one of the first hospitals in the state. So—she knows a thing or two about hospitals! Thank you, Mother Marianne, for coming to Hawaii with all of your sisters to be with us. I want to present you with this gift!
MOTHER MARIANNE: (she opens the gift) Oh! Surprise! It’s a gingerbread lady! And she’s dressed in a black robe and a black veil and—look, children! (she holds it up) Who is it? (chuckling)
CHORUS: It’s Mother Marianne! It’s Mother Marianne!
MOTHER MARIANNE: Thank you, everyone, for my tasty gift! Today we have another honoured guest to be with us: Mrs. Toguchi, King Kalaupapa’s representative. She came all the way from Honolulu to be with us today. To bring us a message from the King. Let’s give her a resounding applause! (loud clapping and cheering)
MRS. TOGUCHI: (comes on stage) Thank you everybody for making me feel so welcome! But I have to disagree with Father Damien! He’s wrong! (a loud gasp goes through the audience) We don’t only have one angel in our midst, we have two angels in our midst! And who do you think the other one is, girls and boys?
CHORUS: It’s Father Damien, it’s Father Damien!
MRS. TOGUCHI: Yes, of course! And I want to present these two angels with the highest honours our government can bestow, from his Royal Highness, King Kalakuau, himself. (she places the medals over their heads)To thank you for your outstanding service to the most suffering people of Hawaii. You have given your lives for us, you have sacrificed your lives for us, and for that we thank you from the bottom of our hearts. We can never thank you enough for all you have done for us.
FATHER DAMIEN: Thank you, Mrs. Toguchi! And let us not forget the other angels in our midst, all the other Franciscan sisters who came here with Mother Marianne! (much clapping and cheering). And I want to thank all the children here today for putting on this wonderful celebration! To tell you the truth, children, this is one of the best days I’ve ever had!
EDWINA: Me too! In fact, I like it here so much that I want to stay! And eat fried chicken and mashed potatoes every single day!
CHORUS: Hurrah for Edwina! Hurrah for Edwina!
(Edwina—who is smiling like a Cheshire cat— bows deeply and exits the stage)

THE END
Father Damien de Veuster died of leprosy in 1889 at the age of 49. He was canonized in 2009. The CATHOLIC ENCYLOPEDIA calls him ” the apostle of the lepers.”
Mother Marianne Cope was canonized in 2012. She died of natural causes at the age of 80 in Kalaupapa in 1918. True to her prophecy, neither she nor any of her sisters ever contracted leprosy during their time in Hawaii.